Directed by Mike Gordon. During high school, Mike built a cabin in the woods behind his house. Materials were assembled at varying rates over two years and a scale model was made with the intention of filming its construction, animation style and making music to the intricate chart of rhythms. Decades later, the cabin had burnt down and it was finally time to write that music. It debuted at the 2006 DC Shorts Film Festival in the Fall and many people clapped. 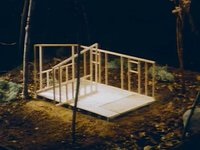